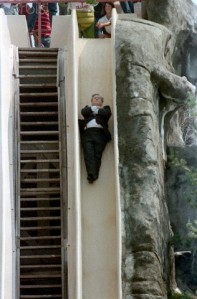 The following was sent to me by my college Mentor, a leader of leaders, who was the Campus Pastor at Liberty University and worked directly for Dr. Jerry Falwell.

Friends,
Six years ago today Dr. Jerry Falwell died. He was my pastor as well as boss and mentor. On May 15, 2007 as I was working on the Fall and Spring Schedule for 2007/2008 I received a text that said lots of rescue personal at the Mansion – it appears to be related to Dr. Falwell. A few minutes later I receive the notice that indeed it was him and shortly the word came that he was now in the presence of the Lord. Today we remember a man that had as a personal desire that God would have all of him. Millions have been impacted by his life and ministry. Before you in my Tribute to him.

My Tribute to Dr. Falwell

Emerson wrote – great men exist that we might have even greater men. The following is a tribute to a great man who made me a better man.

I learned first from Dr. Falwell to be a person of faith. Dr. Falwell can be described in many ways, with many terms. I think without question he first and foremost should be described as a man of FAITH. He believed God. He believed in the power of prayer. He stated that nothing of eternal significance ever happened apart from prayer. He preached many times from Heb. 11:6 – reminding us that it was impossible to please God without faith and that God was a rewarder of those who did express faith. Without question Dr. Falwell was a man of great faith.

Dr. Falwell was a man who had a great Attitude. Over and over he would repeat the quote, “You don’t determine a man’s greatness by his wealth or his talent, as the world does but rather by what it takes to discourage him.” He also said that we should, “remove all negative people from your inner circle.” I believe his faith in God made him always look at life with a positive view. He just believed God could do the impossible. One of his favorite sayings to live by was, “life is filled with glorious opportunities brilliantly disguised as insolvable problems.” I will always remember his positive attitude and his challenge to face life optimistically.

Dr. Falwell was without question a Leader – He was a visionary and he dreamed big dreams – He had his BHAG. He had numerous ideas and then he implemented those ideas. He made things happen. While there was clearly the leadership of his family, TRBC, LCA LU, the Moral Majority and many of the other organizations he started, what will have the greatest impact on me most of all was his leadership of himself. I am convinced that the greatest leaders lead themselves first. You never had to ask Dr. Falwell if he had his quiet time – early in the morning he was alone with God, reading through a one year Bible – reading the devotional My Utmost for His Highest – writing out his prayer requests. He led himself in the area of integrity – being very careful of never giving the appearance of evil. He was a phenomenal Christian leader, but I will take from his life the importance first of leading myself before attempting to lead others.

Dr. Falwell was a dynamic WITNESS for the Lord. Over and over on TV he would share the gospel. I loved to watch him being interviewed by Larry King or some other reporter, knowing that he would be sharing the gospel. He witnessed personally – he started a church by going house to house. He would witness in front of grocery stores. Sometimes he would talk with a person, sharing the glorious story and sometimes he witnessed with a handshake. That is how he impacted me – the first time I met him I was 18 and was very involved in a sinful lifestyle – (I jokingly say that he created Moral Majority because of people like me). I was in a store purchasing beer when I came face to face with him. He, seeing my long hair and seeing the beer in my hand, moved toward me and then to my surprise stretched out his right hand toward me and said “how are you doing, young man?” I will admit to being a little taken back – I expected a sermon – not a hand shake. Later, after getting saved, I read in Luke 15 about how Jesus was known as a friend of sinners. I thought about my meeting Jerry Falwell for the first time and concluded he was acting like Jesus – being friendly toward sinners. He would challenge us to create our own Top 10 Most Wanted List of people we wanted to see saved. Dr. Falwell was truly a witness for Christ.

Dr. Falwell was an Exhorter who poured out encouragement. He believed that people could be Champions for Christ. He knew how to get you to want to excel at whatever you were doing. I know that what I miss most from him is his encouragement. I am one of thousands that will state “he believed in me when I did not believe in myself.” I can tell of several times in which he called to just see how I was doing. He did that with so many people. I will take away from his words to me that he wanted me to be all that I could be for Jesus Christ – a CHAMPION FOR CHRIST!

Dr. Falwell was a man who loved to Laugh. He told jokes – he pulled pranks – he loved to hit you – when he was in his truck he would love to try to run over you or to blow his horn at you. It did not matter who you were either – I saw him pull pranks on the Chairman of the Board. My children will remember him for grabbing them at baseball games and tickling them. I often thought that Dr. Falwell was a man who truly enjoyed life.

Lastly, Dr. Falwell was a man deeply in Love. He loved his Savior. I cannot prove this, but I think his favorite song was My Jesus, I Love Thee. He loved his wife. Hardly anyone ever saw Dr. Falwell cry. The first time I did was in a convo in the early 90’s when his wife was sick and had to be hospitalized – as he talked about her he choked up. You could tell he loved her deeply. Some of the greatest words ever spoken to me from Dr. Falwell were words that challenged me to keep my relationship with Donita a top priority and keeping it fresh. I can truly say I have had a role model in being a husband. He not only loved his wife, he loved his children. Over and over he stated “what does it profit a man if he gained the world and lose his family.” I not only learned from his example and teaching about being a husband but about being a father! He loved his church – TRBC – but let me quickly say that it was not the building – it was the people. Because of my role with the viewings that took place after his passing I was privileged to see thousand of people walk past his casket. I marveled at how many people just stood and wept. Some would come over to me and tell a story of something that Dr. Falwell did for them. It was so clear that the people of TRBC loved their pastor because he loved them. I will never forget the love he showed me and my family when my mother died. He and his wife drove out to my father’s home to visit with us and pray with us. He truly showed love. And yes – he loved Liberty University. He was its #1 fan. He attended as many events as possible – howbeit sports or musicals or plays or debates. But above all, as stated above he loved his Savior most of all, of whom he now worships face to face. And though he is not here his works live on.

I will never be same because of meeting – knowing – ministering with Dr. Jerry Falwell. And may that be true of all who knew him. I conclude my reflection by giving this challenge
May we all find ourselves living by FAITH
May we all daily have a positive ATTITUDE
May we strive to be a mighty LEADER
May we always be a WITNESS
May we strive to exhort and ENCOURAGE
May we enjoy life with much LAUGHTER
May we be known for demonstrating LOVE.